Layer height: Does it really matter for a 3D part? 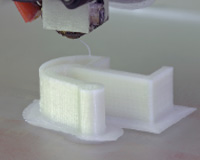 Layer height may be considered as one of the most trivial of the 3D printer settings. However, it often plays a huge role in the entire 3D printing process.

3D parts are built in an additive nature (printed layer by layer). Thus, the thickness of each layer may determine the surface quality, resolution and printing time of the 3D part.

Layer height is the exact height of each layer of material that is cured, extruded or sintered by a 3D printer. The layer height setting can be adjusted through a slicer program. Layer height should be set up properly because it will also affect the print’s speed, smoothness and resolution.

Layer height is usually measured in microns. One micron (µm) is equivalent to 0.001mm. The standard smallest height is generally between 50 and 100 microns (0.05 and 0.1 mm).

Why is layer height important

For 3D printing processes such as SLS, Material Jetting or SLM/DMLS, assigning a layer height is not necessary. This is because the layer height is already pre-set by the machine manufacturer.

When it comes to FDM and SLA, the layer height is an important design parameter that needs to be considered. An inappropriate layer height can affect the printing time, cost, visual appearance and physical properties of a 3D part.

There is a small difference in the appearance between 3D parts that are printed at 100 µm and 200 µm. However, the printing time for 3D part at 100 µm will take twice as long to print. This is because the 3D printer will have to trace many cross-sections of the 3D part.

Reasons for changing the layer height

Below are a few reasons why designers change or modify the layer height. Read on below to learn more.

Changing the layer height will also increase the printing speed. If there is a larger layer height, this means that the 3D printer doesn’t have to print many layers to achieve the same total height. This will result in a much faster print.

Lower layer height will cause the 3D printer to slow down its speed. Thus, the printer will also put down more layers for a given height. This will also allow the 3D part to have a much higher detail and resolution.

With this knowledge in mind, printing with 3D part that requires very smooth surface finish such as axles can be possible by just reducing the layer height.

Different 3D printers have different maximum resolutions for layer height. Below is the standard layer height for the most common 3D printing processes.

Layer height may be considered as a not-so-important 3D printer settings. However, when used right, it can greatly impact the entire 3D printing process and the outcome.

Prior to printing, the 3d designer should also determine ahead of time whether visual appearance or functionality is their main concern. In that way, they can decide what will be the layer height for a specific 3D part.